The subject of abandoned pipelines is tricky. The idea of an abandoned or out of use pipelines reverting in ownership to the easement or land owner is even trickier.

I have written about, testified and lectured on the subject of abandoned pipelines for 20 years. My company, Pipeline Equities has successfully removed and recycled some 25 million feet of idled, out-of-use, or uneconomic pipeline over the past 30 years, mostly with asbestos in the coating. Many of these lines could have been called abandoned pipelines.

For the most part, pipeline operators don’t want to deal with the sale of idled pipelines because of potential liabilities, carried book values of these dormant pipelines, and the amount of money, time, and effort it would take for a such a transaction to take place. It is easier for a pipeline company to “let that dog lie” than to possibly create problems that might be more economical or better off left alone. A development officer is not going to get any credits, raises, or promotions for selling an idled pipeline for salvage or scrap related prices. So out of use pipelines become the stepchildren of the pipeline industry.

But, who really owns these properties known as abandoned pipelines?

An installation in a home such as a toilet or bathtub in a bathroom, once installed, becomes a permanent fixture of the house. On giving up the house by sale or otherwise, an owner would never consider ripping out the toilet or bathtub and moving them out like other household furnishings. Oil, gas, water, sewer, or product pipelines are similar in relationship to the easement as the toilet or bathtub is to the house. Once the pipeline is laid, it becomes part of the land (easement) as a fixture and transfers with the land in all subsequent transactions.

Right of Way or Easement Agreements

The solution lies in the body of the original contract (right of way or easement agreement) between grantor (landowner) and grantee (pipeline operator). That contract will spell out all of the rights and privileges of the grantee or lessor on installation of a pipeline and will generally have a section like this:

Grantor hereby sells, grants, conveys, with covenant of general warranty unto The Company, an easement and right of way to construct, lay, erect, operate, maintain, repair, reconstruct and remove a line or lines of pipe for transportation of oil or gas or both together with the equipment necessary or appropriate in connection therewith along a route to be determined by the The Company.

What follows is usually a description of the land where the line is to be laid. The language above is written into most pipeline easement or right of way contracts and is standard with specified exceptions in some documents. The problem becomes evident (to the current or subsequent grantor) when a realization comes and shows there is no finality, closure or disposition of the pipeline after completion of the intended purpose. This is a permanent easement and is written in perpetuity unless it is a lease or has specified termination dates due at the end of use. Unless specific wording or action is taken to terminate, it will be a pipeline easement forever whether in use or not.

Seldom is language written into a document that talks about removing the pipeline after the job is over, unless on rare occasions, a landowner insists. A pipeline operator laying a new pipeline from point to point believes the line will be in use for the foreseeable future or beyond. Whether by oversight, optimism, or the nature of pipeline construction, we assume the laying of a pipeline to be a permanent endeavor. No thought is given to removal of the lines if and when the job is over. It becomes as permanent as a highway.

There has been much discussion regarding abandonment issues. Guidelines have been published about how to properly abandon a pipeline by removing supply and purging the line of whatever materials it transported and removing above ground appurtenances of equipment and signage. There is no discussion of removing the pipeline itself. It is as though the expectation even among governing bodies such as the FERC and others that most or all pipelines will be abandoned in place. Why not? The only reference ever given for a pipeline removal generally is when necessary as part of general operations and maintenance and that reference is only for active pipelines and active easements. When operations cease and the easement is actually abandoned or given up, the pipeline invariably goes with it. That is the meaning of abandoned in place. It means a pipeline is given up along with the easement that has been or is being abandoned.

I receive a call a week from a frustrated landowner who has an abandoned pipeline on his property. Usually, this landowner wants to contract our company to remove the pipeline so they can proceed with construction of a pond, shopping center, housing subdivision, etc. Landowners believe the line is abandoned (and now is owned by themselves) because the intent to abandon is evident by the lack of maintenance or any signage indicating activity. But they don’t know for sure and don’t really want to start digging around when they might not know what lies below.After all, state records could indicate the line is abandoned or as operators declare, “abandoned in place”. Now again I remind you there are no considerations or directions in official documents for the disposition of the abandoned pipeline residing in the easement.The landowner assumes the pipeline belongs to him. After all, the records show (in some jurisdictions) the line is abandoned or abandoned in place and there is no evidence of maintenance of the line by the operator on the easement on the landowner’s property.The landowner reasonably concludes that the in-active, abandoned pipeline on his property belongs to him.

Out of Sight, Out of Mind

In most cases, an out-of-use or abandoned pipeline is an “out of sight, out of mind” piece of property. It is generally buried “below plow depth”, with three to four feet of cover. There are never problems until the current landowner wants to build something and runs into the pipeline while excavating that they didn’t know existed. The worst-case is when landowners assume the line is abandoned by their own definition of abandonment, claim ownership, and then proceed to dig it up using untrained contractors. Excavating with no knowledge of the pipeline can be perilous. These pipelines probably will have an asbestos coating and digging them up in a traditional manner could cause problems.  Additionally, the pipeline may still have residual oil, gas, distillate or another product internally that could be harmful or possibly explosive if excavated improperly.

Pipelines and other Appurtenances

Appurtenance means to relate to, be appropriate or applicable. In real estate, real property is defined as immovable or fixed property, any property attached to the land itself and includes permanent fixtures within the property. Appurtenance is described as property rights or items that are permanent and passed along with the sale of the property.

The International Right of Way Association defines appurtenance as: An item of property accessory to or incidental to other property. Title usually passes with title to the principal property.

Examples of appurtenances include swimming pools, fences, septic tanks and sheds that are fixed to the land. Included are telephone and electric installations, sewer systems, water, gas, and other piping.

There are some three million acres of public land in West Texas that belong to the State of Texas University Lands. Administrators have developed a comprehensive set of rules and standards that must be adhered to. The terms are very explicit and could be model for pipeline contracts. The easements are not granted in perpetuity, but leased and generally for ten-year terms for pipelines. Easement tariffs are assessed by diameter and length. In some cases, there are tariffs on throughput of product, whether, oil, gas or water. Part of the agreement states that on termination of the lease, the lease is either renewed by the terms of the day or the line is removed and damages are assessed at a designated cost per diameter inch of pipe and per foot

Whereas, the University Lands have very specific stipulations for removing a pipeline after the term of the lease. Other leases on other lands may not address pipeline removal — a nod to the belief that pipelines will be in perpetual use and are permanent fixtures to the easement. In these cases, when a lease is not renewed, the easement reverts to the grantor (landowner) along with all of the improvements (pipelines) or other appurtenances above and below the surface of the property. 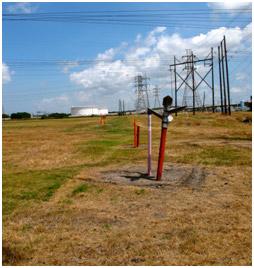