Most issues or problems regarding a pipeline right-of-way can be resolved by thorough investigation of the original easement agreement. This document determines the terms and conditions of laying and maintaining a pipeline on a property. It is the base contract between the landowner (grantor) and the pipeline operator (grantee). It is the law of the land, and almost anything that is negotiated between the grantor and grantee can be included in the easement or right-of-way contract:

Ingress/Egress rights – An easement agreement contains the right to enter (ingress) and exit (egress) a piece of property for the purpose of laying and maintaining a pipeline. The pathway for entry and exit may be included as well.

Pipeline and Throughput –An easement agreement may specify the diameter of the pipe and the number of lines to be laid in the easement as well as what is to be transported within these pipelines.

Duration –An easement agreement may specify the length of time that the contract is in effect. During this time, the grantee has the right to use the easement as defined in the agreement. Less than 10% of all easement contracts have a termination clause.

Fees –An easement agreement may specify payments that should be made by the grantee to the grantor for the use of the land.

Other Conditions – An easement agreement may specify conditions in case of damages to land or crops as well as rights for the grantee to add other fixtures or appurtenances in the future.

Mediation/Arbitration– An easement agreement may specify provisions for mediation or arbitration should the parties disagree on provisions.

The easement agreement should be the last word in any pipeline issue (as it is a legal document), but the terms of the agreement are always subject to interpretation. For the most part, the agreements are clear and precise as to rights and privileges of the given to the grantee from the grantor.

Almost all easement contracts are renditions or repeats of the legal language used since pipeline easements began. The following is an excerpt from a typical contract used in 1927. It is not much different from ones used today and would include most contested agreements argued today.

to the undersigned owners paid, the receipt of which is hereby acknowledged, the undersigned hereby grant to Humble Pipe Line Company, organized and existing under the laws of the State of Texas, its successor and assigns, the right of way to lay, maintain, operate, and remove a pipe line for the transportation of oil and gas together with the right to ingress and egress on and through the following described lands situated in Crane County and the State of Texas, to-wit.

The said undersigned owners, their heirs and assigns to fully use and enjoy the said premises except as the change may be necessary for the purposes herein granted to the said Humble Pipe Line Company, its successors and assigns.

The said Humble Pipe Line Company, its successors and assigns, hereby agree to pay any damages which may arise from the laying, maintaining, operating or removing said pipelines; said damage, if not mutually agreed upon to be ascertained and determined by three disinterested persons, one thereof to be appointed by the owners of said land, their heirs and assigns, one by Humble Pipe Line Company, its successors and assigns and the third by the two so appointed as aforesaid, and the award of such three persons shall be final and conclusive.

Humble Pipe Line Company further agrees to bury and maintain all pipe lines so as not to interfere with the drainage of said land.

Any changes or additions are inserted here and followed by signatures and dates.

The terms in the above easement agreement are plain and simple and have a minimum of verbiage. Problems arise when the unsaid or unexpected becomes an issue.

Today’s problems stem from how agreements are made initially. The grantor is usually offered a standard contract form that is presented all up and down the right of way as if it is the standard and only way. The accepted approach is the terms of the contract are spelled out and the only thing to negotiate is the price. Blinded by anticipation of the monies we are to receive for the easement across our property and usually the wording and the terms of the contract are soon become less of a priority for negotiation and forgotten.

A sizable number of problems exist with easements and right of way agreements is with what is not addressed rather than the actual terms that are addressed. Tracts of land are split, owners change, needs change, and the pipeline industry changes. There is always evolution and often all parties concerned are content to leave terms alone as tradition overcomes reason. The greatest problems arise from evolving situations unimagined in the drafting of an easement agreement. The following list provides issues for which standard easement agreements do not expressly provide guidance:

Other problems come about due to the age of many pipelines. Hundreds of thousands of feet of pipeline were laid from 1940 -1970 and are very much in use. The age on many of these pipelines is beginning to be more of a problem as shown by sophisticated inline inspection tools that are documenting more anomalies. The inline inspection tools being developed for both liquid and natural gas lines are much more sensitive and sophisticated and are able to pinpoint corrosion spots, metal wear and cracking like never before. Problems arise when these sophisticated pigs run through these old lines and find issues with old pipelines. Once these issues have been determined, operators are responsible for further inspection and repair by direct access (digging and exposing the pipeline).

Many landowners are not aware they have a pipeline on their property as they never looked at the title report or the easement records attached to the land they own. Problems and surprises come when repair crews arrive to dig in their front yard. The frequency of these“surprise” repairs may be accelerated by recent regulations adopted in 2019 for vintage pipelines which will require more frequent inspections for some of these older lines.

The Future of Easement Agreements

Over the past 40 years, I have reviewed thousands of pipeline easement contracts as our company has removed millions of feet of idled, abandoned or out of use pipelines. Knowledge and familiarity with the easement contract is essential as it becomes the law for all concerned. Everything that is allowed or disallowed is spelled out. The problems arise when the unforeseen occurs that are not mentioned in these contracts.

The agreement should be the last word, but it is always subject to interpretation. For the most part, the agreements are clear and precise as to rights and privileges of the grantee from the grantor. I believe that we will see more and more emphasis on the letter and intent of all parties regarding this type of contract as landowners become more and more sophisticated and informed. 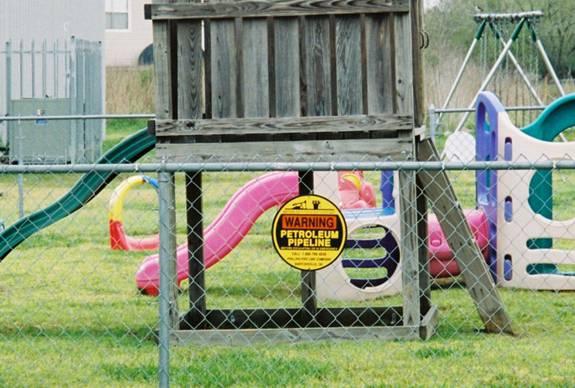 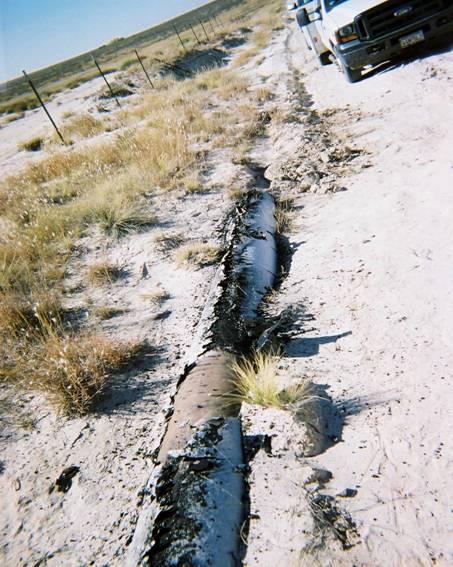 Soil erosion and pipe migration causes exposure and other problems. 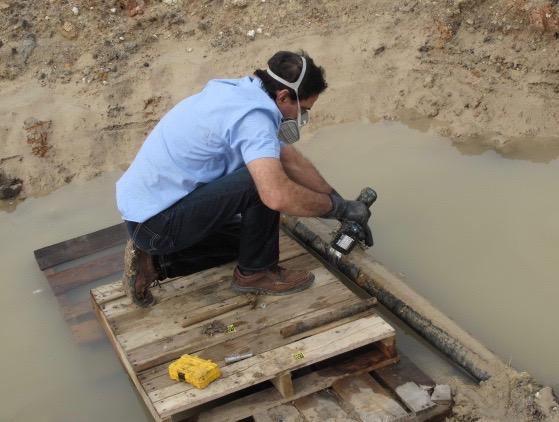 This technician is testing a line for pressure and content on an alien and unmarked abandoned crude gathering line discovered on a suburban housing development site.