This pipeline went through three owners over time and was purchased for salvage in 2007. The fields and wells the pipe was intended to service had been depleted, and it was no longer viable as a pipeline where it was. A pipeline-recovery team removed the line and the operating company’s marketing department found, despite a little wear, the pipeline retained the qualities of good Grade B steel. WT was intact and had little corrosion, making it suitable for transport of slurry from a copper mine in northern Mexico to the disposal site nearby. The owner plans to use it for as long as the mine is in operation.

Pipeline Equities in 2008 took up a 6.625-in. OD line in Central Louisiana in gas service for 9 years. The field was depleted and the landowner, using the land for timber, wanted the pipeline removed so he could use the right of way to plant more trees. PE took up the line and transported it to Certified Pipe Service Inc.’s Houston yard where workers cleaned out paraffin from the interior, straightened the joints where needed, and removed the fusion-bonded epoxy coating from their exteriors.

An 8.625-in. OD pipeline relaid in the 1950s near Amarillo, Tex., used one of the first electric-weld constructions. In service until 5 years ago, the pipe’s coating remained well bonded and the pipe itself in excellent condition. A customer wants the pipe taken up with minimal or no damage to the coating. PE estimates 15% damage to coating, an amount economically replaceable in the field with patches, taking up the pipe in 60-ft sections to decrease the number of welds and limit trucking expenses. The customer plans to relay the line for low-pressure natural gas service in the Permian basin.

A compelling reason to rehabilitate a pipeline is to get rid of the costs of keeping it in the ground. Miles of permanently idled pipeline are regularly patrolled by employees dedicated to the task. Other companies contract agents at even greater sums to answer “One Calls” or DOT calls flagging lines for construction or other identification purposes.

Pipeline companies will be required to remove pipelines if they are termed abandoned or if they are idled with demonstrated “intent to abandon” by lack of maintenance, removal of signage, failure to pay taxes due, etc. Regulators will require companies at least to identify dormant pipeline inventory and obtain permission from landowners before abandonment procedures of any sort. 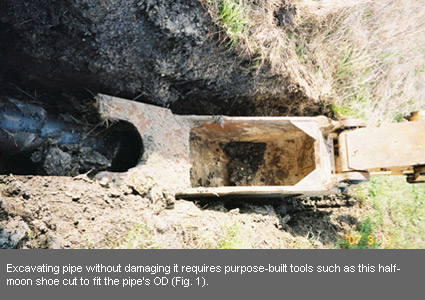 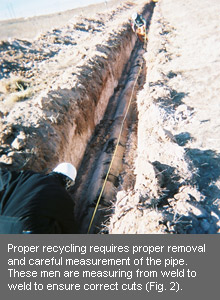 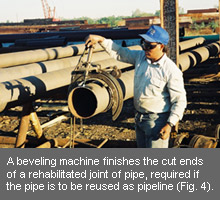 The best method when the operator owns the easement is to return the right-of-way to the landowner at the operator’s expense. The landowner would like to have clear unencumbered title to his property; granting him that will help move the process along. Once the exchange of dollars comes into the picture, it becomes the basis for everything, and it is only a question of how much the operator is going to pay. 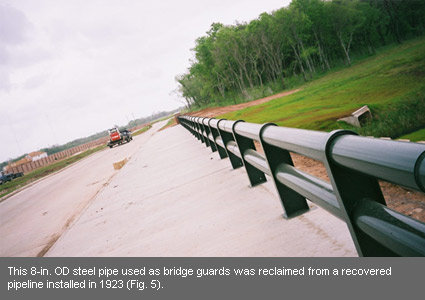